Persons outside the boardrooms sometimes cast covetous eyes on what the Directors receive. That way lies unhappiness for both.

They together agonised on the advisability of a physical meeting. Then, having persuaded themselves that, with the possibility of a third wave around the corner, this lucid interval between “waves” was a good opportunity for a physical meeting, they decided to catch up in one of their usual watering holes.

The two protagonists of our story are both senior citizens. One has, for many years, held senior positions in Government (I did not say “worked”), and the other is a weighty presence on a few corporate Boards.

Having exchanged pleasantries, and ordered their usuals, they settled into conversation. The erstwhile Government servant was first off the starting block. “Did you see the article on Independent Directors being pampered for being no more than physical presences in boardrooms?” The other decided that a combative attitude was the order of the day. “Taxpayers pay the likes of you for sitting in your houses. I at least travel to the boardroom, and occupy one of the chairs!” was his no-holds barred response.

Before the pensioner could formulate his comeback (pensioners have a right to be slow responders), the Independent Director (ID) continued. “How do persons outside the boardroom have any clue about what we do in the boardroom? Have you heard any Promoter, or equivalent thereof, make a public statement that IDs are a cost factor, and add no value?”

By now, the pensioner had worked up his argument. He said “Surely you don’t expect them to say that, having made the mistake of getting persons like you on their Boards. Which intelligent man would like to admit his mistake in public?” He continued. “Your types get sitting fee for occupying seats. How in the world can that be justified? Being seated is not a favour that you are doing to the Board or to the stakeholders of the company.” The response was prompt, if a little expansive. “Have you heard of ranked players getting appearance fees for turning up at tournaments, even if they don’t win the first round? Sitting fee is for turning up. What we get paid for contributing to the proceedings is a share of profits. Before you proceed further, let me point out to you that a share of profits, also called profit linked commission, is a legitimate payment under the Companies Act, 2013.”

Now it was time for some quantitative statements, helped by some of the numbers that had come into the public domain recently. “Why should any company pay more than a crore of rupees a year to persons who attend 4-5 meetings? Isn’t that excessive by any stretch of imagination?”.

Directors are often accused of keeping their mouths shut, except when the tea and the cookies come, and have to be dealt with as agenda items of the meeting. This time however, the worthy Director chose to speak, rather than let the allegation pass. “The Parliament of India represents the collective wisdom of the nation. In its wisdom, it has enacted a provision stating that there shall be a ceiling of 1% on the commission paid to Non-Executive Directors. Knowing that you could come up with such questions during this conversation, I did a little research, and discovered that no company has hit the ceiling of 1%. Why are you then second-guessing the wisdom of the Indian Parliament? Until recently, only profit-making companies could pay a commission as share of profits. Are you saying that those profits were made in spite of us IDs, or will you admit that it was partly because of us IDs?”.

The pensioner persisted “But isn’t that excessive? As it is, you get upto a lakh of rupees for every meeting of a Board or a committee. That itself should add up to a tidy sum during the year. Isn’t a share of profits unjust enrichment, for non-executive types like you?”.

Now, the usuals that had been ordered, made their appearance, and it was time to commence partaking of those, before resuming the duel. The pensioner however could not keep quiet even at this stage. “You chaps get fancy stuff to feed yourselves during the meeting, and at lunch” he said. “Can you not be given a lunch break, so that you could go outside, pay for your lunch, and get back to the meeting thereafter? What is sitting fees meant for if it cannot accommodate this part of your daily expenditure?”.

The reply was some time coming presumably because on account of virtual meetings in the recent past, the Director had been deprived of the goodies served in the boardroom. So, he took some time to savour the taste of what had just arrived, and thought that he could respond appropriately after he had suitably fortified himself. The pensioner believed momentarily that he had asked a question which brooked no response. When it came, the reply was hard hitting. “You remember many years ago, we together laughed at the headline of a news item ‘Don’t Brigadiers eat?’ That, if I may remind you, since your memory is selective, was a case made out for free rations to all persons, including the highest ranks in the armed forces, without restricting it to Colonels and their juniors. Is it your case that they were being given ration because they could not afford to pay for their meals? It is a convenience and a facility, my dear friend. Don’t try to put a number to it.”

Suitably strengthened by the absence of an immediate counter, the Director continued. “Do you know that we are members of the Board because shareholders elect us to be on Boards. They know that we are best equipped to protect their interests in the boardroom. You started out by second-guessing the Government’s decision on commissions, and now you are questioning the intelligence of informed investor-shareholders, on the basis of whose trust and expectations, we get to occupy boardroom seats.” This was too strong a statement to go unrebutted. “Are you telling me that in a large overpopulated country, only a few 100 of you are fit for boardroom positions, and that you have to occupy 7 of them at the same time?”. The Director was not one to give up easily. “There you go again. At first you questioned the Government, then you questioned the shareholders and the investors, and now you are questioning the securities markets Regulator, who allows each of us to be on a maximum of 7 Boards.”

At this stage, a mutual acquaintance walked up to their table. He said “Seeing both of you from a distance, speaking passionately, I thought you were discussing some important matters of national interest.” There was silence for a while, and then the pensioner spoke up. He said “We were wondering why corporates were carrying passengers in boardrooms, and how, for the privilege of travelling to Board meetings, they were also getting paid?” The Director could not hold himself back. He said “It started with the larger question of why taxpayers should meet the monthly expenses of persons happily sitting in their homes, with no agenda notes to ponder over and no travel requirements.” The mutual acquaintance quickly discovered that he was in dangerous territory, and that it was best to leave the two protagonists to continue to engage in their verbal joust.

The Director thought that another pot shot to be taken. “Have you heard of the risk-reward trade-off?” he challenged. You sit safely at home and get money. I participate in Board meetings, and contribute to decision-making, with the risk of being a State Guest if something goes wrong, and some agency second guesses the Board’s decisions. The last time you heard of liabilities and penal consequences must have been several years ago.”

Meanwhile, the waiter at the watering hole started to look at the two expectantly, hoping they would leave, and vacate seats for others who had come in. Predictably, the bill also arrived.

One issue remained. Who would foot the bill? Would it come from the Government pension or the corporate pay-outs?

THE STORY SO FAR… 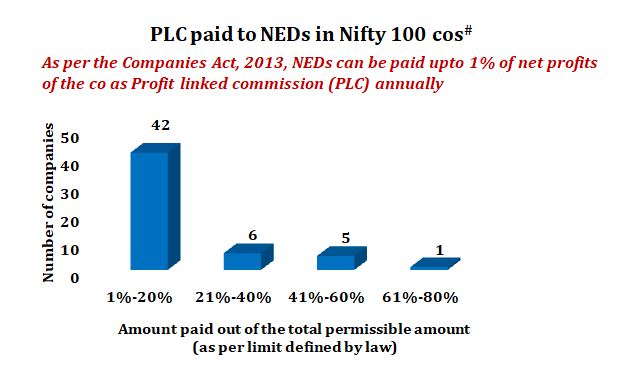 Data for FY 20 (and not FY 21) has been considered since pursuant to an amendment in August, 2020, the format for disclosing the relevant details has been modified, and hence data for many of the cos for FY 21 was not available in the revised format.

*Highest PLC paid is 63% of what could have been paid

* 60 cos have been considered.

– 25 cos to which provisions relating to PLC are not applicable since they are banks, insurance cos or PSUs.

– 4 cos which have inadequate profits

– 11 cos which did not disclose the amount that can be paid as PLC (1% of net profits).