TIME FOR A NEW BANKING COMMISSION?

Planned expansion of banking services calls for the setting up of a Banking Commission.

The setting up of a Standing External Advisory Committee (SEAC), headed by Mrs Shyamala Gopinath, former Deputy Governor, RBI, to consider applications for on-tap licensing for Universal Banks and Small Finance Banks, raises a fundamental question. What should the banking scenario in India be, going forward?

Prior to the setting up of the SEAC, RBI had notified that there were 4 applicants each in the category of Universal Banks and Small Finance Banks. Now that the Committee has been set up, and this is a continuing process, without a timeline, one should expect to see more applications in due course. This expectation is reinforced by the fact that the list of applicants for Small Finance Banks includes a Cooperative Bank, and many more in this category are likely to opt for this route.

Every once in a while, there is a view expressed that India is an underbanked country, and needs more banks, presumably with an increased branch presence. This runs counter to the fact that in the recent past, the expansion of banking has been through branchless banking, with the delivery of banking products and services through digital and technology interventions. While it is admitted that there are areas in India which could do with more banking facilities, it would not be cost effective for banks to opt for a brick and mortar presence in such areas.

The first question which needs to be asked is how many banks, and of what type, does India need? To see matters in context, it is necessary to roll back the years, and look at where India was immediately after independence. Prior to independence, there were a number of small private sector banks, with limited local outreach. With the coming into effect of the Banking Regulation Act 1949, those banks that survived at that time, were brought into its fold. A few years later, the State Bank of India Act 1955 was enacted, converting the erstwhile Imperial Bank of India into an RBI majority owned commercial bank. Even though it must have been noticed that a Regulator being the majority owner of a large bank would give rise to conflicts of interest, it was seen as a lesser evil compared to the Government of India assuming majority ownership of the bank. The State Banks set up in the erstwhile pre-independence kingdoms were brought into the fold of the State Bank of India (Subsidiary Banks) Act 1959.

After 1949, no new banking licenses were issued till the ‘90s. However, through 2 enactments in 1969/1970 and 1980, the 20 largest private sector banks were nationalised in 2 tranches of 14 and 6 respectively (one of the 20 nationalised banks, namely the New Bank of India, was merged with Punjab National Bank, reducing the number of Nationalised Banks to 19).

In 1991-92, when the public sector was beginning to be looked at less kindly, new private banks were licensed, for the first time, after 1949. 9 new entities were granted licenses, and 1 Cooperative Bank was allowed to be converted to a commercial bank. It is interesting to note that of the 9 that were granted licenses with great fanfare, only 5, including 4 with institutional parentage, continue to survive, with some of the other 4 being quick mortality cases. Subsequently, 4 new licenses were granted, 2 each in 2003-04 and 2015.

The century gone by also noticed the presence of a new category called Regional Rural Banks (RRBs). These banks, with a trinity of owners, namely, the Sponsor bank, the Union Government and the concerned State Government, were meant to be low-cost interventions, to provide basic banking services in rural areas. A theoretically well-intentioned, but economically disastrous decision, to equate the pay scales of persons working in these banks to the pay scales of persons holding similarly named posts in the Sponsor banks, rendered the barefoot banker a costly proposition. The higher pay scales for Branch Managers of RRBs, introduced a sense of disconnect between them and the lesser paid Block Development Officers, in whose territorial jurisdiction they operated. Many of these RRBs were nothing more than agencies for deposit collection for the Sponsor banks. In due course, through welcome mergers, the number of RRBs got reduced from 196 to 43.

Persons that continuously seek wisdom from the West, then introduced the Local Area Banks (LABs). These were banks meant to serve 2 or 3 contiguous districts. Only 4 applications were received for this category. 1 has since converted to a Small Finance Bank, and 1 has had its license cancelled by the RBI. It is not known at what levels of efficiency, and with what impact, these banks are presently operating.

If all this could happen in the previous century, the 21st century could not afford to be left behind. Therefore, we saw the emergence of the phenomena of Small Finance Banks and Payments Banks. There is almost radio silence on how these are performing. The much-touted India Post Payments Bank seems to be limping along.

While all of this was going on, Cooperative Banks continued their practice of banking, with gay abandon, with a few of them occasionally going belly up, and the DICGC having to cough up money to help their depositors. The Banking Regulator continued to moan that dual regulation, amounted to ineffective regulation. The outcome might well have been different if they had focussed on functional regulation (namely, regulating the business of banking, especially for banks in the payment system), and left the entity regulation to the Registrar of Cooperative Societies. A variation on this theme, the Multi-State Cooperative Bank, has already been seen to fray at the edges, with the Regulator and the Government being held to account for the unenviable state of the hapless depositors.

During this period, major Private Sector Banks, more than blotted their copybooks by unacceptable governance practices, leading to numbers that did not reveal the truth. The Banking Regulator, which claimed that it did not have adequate power to regulate the Public Sector Banks (PSBs), did not emerge with flying colours in regulating the errant Private Sector Banks.

While these series of interventions were being gone through, it occurred to persons, then at decision-making levels, that the PSBs were not giving adequate attention to the banking needs, especially the credit needs, of women. Consistent with the approach, “give me a problem (in this case imaginary), and I will find you a solution”, the Bharatiya Mahila Bank was set up, to cater to the needs of women. After a few years of existence, without any significant contribution, it was merged with the SBI. It is relevant to mention that at the time the bank was created, ostensibly because inadequate attention was being paid to the banking needs of women, Chief Executives of 5 large banks happened to be women.

It is with this background, that we need to ask ourselves, how many more banks do we need, and of what categories? The conspiracy theorist would have us believe that the process of licensing will now be commenced to enable the grant of licenses to persons, who having got them, will cast covetous eyes on the PSBs that will be up for sale in due course.

PSBs and their governance merit some comment. With the Banking Regulator having publicly claimed that it is inadequately empowered to deal with PSBs, the burden is more than ever on the majority owner to show the way, especially by exercise of powers that are still available to it under the 2 ownership Acts. How is this playing out? A few years ago, following the salutary principle that the positions of the Chairperson and the Managing Director should be separated, the majority shareholder appointed 6 persons of eminence to be the Part-time Chairpersons of the larger PSBs. Even at that time, some questions were raised regarding the role of these Chairpersons, who, as Part-time Non-Executive functionaries, could not have been expected to roll up their sleeves, and deal with the NPA problem, which was the major issue with PSBs. Their terms having got over, several months ago, the positions remain vacant, leaving one to wonder whether the original intent has been proved wrong. At the same time, positions of Executive Directors have remained vacant for long periods. Positions of Independent Directors also remain vacant. The statutory prescription to have 1 Workman representative and 1 non-Workman (Officer) representative on the Board was given the go-by several years ago. Sceptics wonder whether it is at all necessary to fill these Board positions, when many decisions, that should normally be taken by the Board, are taken by the Government.

A little over 40 years ago, we had 20 PSBs, excluding the SBI and its 7 Associate Banks. Today, the SBI exists in splendid isolation, with its erstwhile Associate Banks having merged into it. As for PSBs, by a series of mergers, we are left with 11 out of the original 20 Nationalised Banks. Of these, 2 are being identified for sale, in the first instance. The guessing games are still going on as to which 2 of these surviving PSBs will move to a new ownership pattern. It is only a matter of time before there would be a few more mergers, leaving only 5-6 PSBs. In a country as vast and as diversified as India, with its 130 crore plus citizens, at vastly different economic levels, careful thought needs to be given to whether the absence of a reasonable public sector presence in the banking sector, would further accentuate the sense of relative deprivation, which exists at present.

Is this then the time to grant more banking licenses? Would this not be the ideal time to set up an appropriately empowered, and duly constituted, Banking Commission, to prepare the roadmap for the banking sector in India? If nothing else, it will be a timely tribute to the memory of the late Mr M Narasimham, the father of banking sector reforms, who brought modernity into the process of thinking about the banking sector, and regrettably, left us a few days ago.

Post Script
Even as this newsletter was taking final shape, there was a major development. RBI came out with directions on some aspects of Corporate Governance, effective immediately, while providing for some “transition arrangement”. The timing is curious. There is an idea afloat to bring all PSBs under the Companies Act, 2013, and to scrap the Nationalisation Acts. Reconciling the obvious conflicts is a tale for another day.

THE STORY SO FAR… 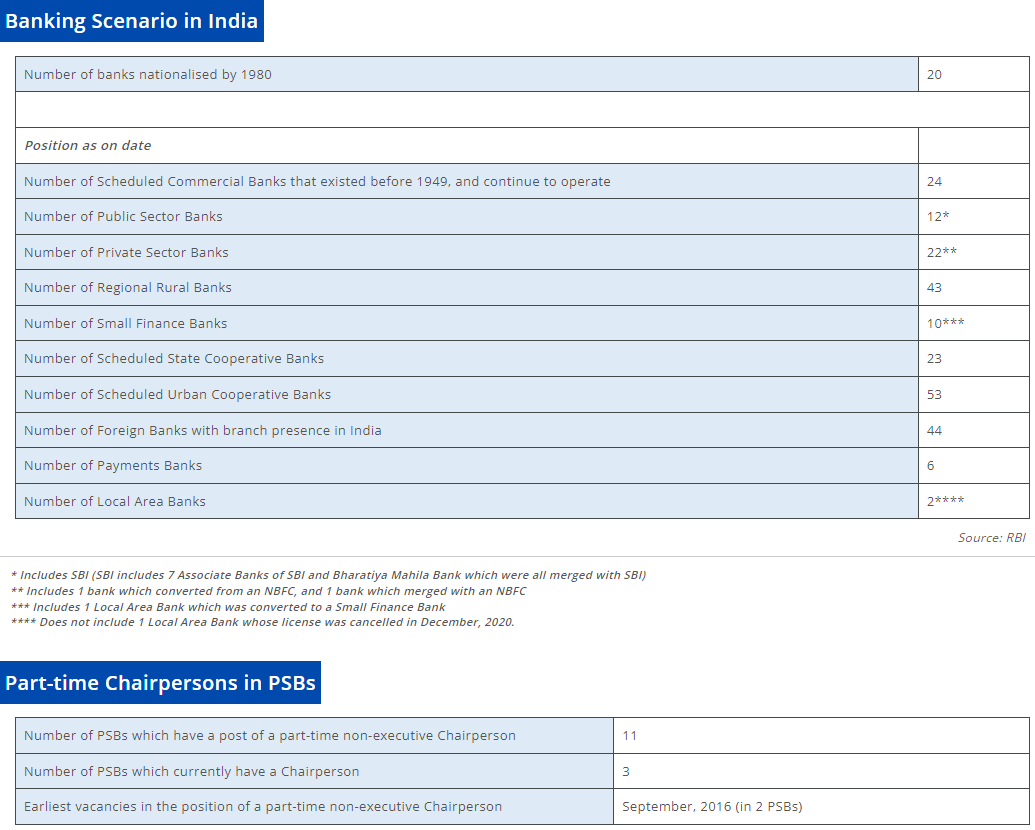