The next Summer Olympics will be held in 2024. The world will get to see new champions. Can stakeholders also hope to see new Board members that champion their cause?

In the aftermath of the global pandemic, many countries have been grappling with a relatively new problem that the western world has christened “The Great Resignation”. With the comfort of working, or not working, out of homes, and of being away from the pressure cooker situations that the office environment sometimes resembles, a number of persons have opted out of the formal system.

Two years down the line, corporate India will witness its own version of “The Great Exodus”. Familiar faces will no longer be visible in the boardroom. A large number of persons, answering to the description of Independent Directors (IDs), will be vacating their positions on the Boards. This major change will be occasioned in most cases by the second of the 2 five year terms coming to an end, and in the case of those who would have completed only one term, discovering that there is much more safety remaining outside boardrooms.

A recent study undertaken by Excellence Enablers shows that around this time, 2 years from now, nearly 500 positions of IDs in the top 200 companies will fall vacant. Given the lead time that would be taken to identify an adequate number of potential IDs, and the consequent process to appoint them on Boards, it is necessary for corporates to immediately give thought to the kind of persons that they would like to have on their Boards 2 years from now, if not earlier. Also, if the transformation is to be non-disruptive, some of the new persons could be brought on Board, before the vacancies arise, so as to ensure continuity with change.

It is abundantly clear, that the responsibility associated with Boards necessitates the appointment of Directors, who will add considerable value. It should not be seen as a mere filling up of vacancies merely because nature and regulations abhor a vacuum. It is for the Nomination and Remuneration Committees (NRCs) to set the ball rolling. The first mistake to be avoided is to attempt a like-for-like replacement, because it is entirely possible that skillsets and insights which were relevant 10 years ago, while continuing to be relevant, might not be the most important parameters for determining the suitability of a contextually relevant candidate. Over 10 years, many businesses have reinvented themselves, and many corporates have got into newer lines of business while either scaling down, or abandoning older lines of business. Skillsets that have contemporary and future relevance should determine which of the potential candidates will make the cut when it comes to directorship. A perusal of the tabular statements, in Annual Reports, indicating the skillsets associated with the present members of the Board, would seem to indicate that most of them have every conceivable skill known to humankind. A more honest assessment of existing skills is an exercise to be undertaken parallelly with the identification of newer skills that are relevant for the future. NRCs must remember that they are helping to build the Boards of the future, and for the future, and should therefore be forward-looking in their thought process.

Where will the NRCs source such a large number of persons who are able and willing? It is useful to look at what they should not end up doing. The easiest, and the most avoidable course, is to access the database maintained by an institution for whom the recently introduced examinations, and the maintenance of a database, have become dependable revenue streams. Experience, since the databank has come into existence, has shown that most companies do not seriously look at it, when identifying potential Directors.

The second option which, if implemented, should be attempted with utmost care, is the mechanical outsourcing of the process to headhunting firms. Many of them have large impressive databases of persons who “have been there, done that”, but their fitment in a contemporary Board might not be free from problems. Further, the more attractive among those candidates are likely to be approached by quite a few companies, and their availability, following a detailed process of identification, which is time-consuming, is not guaranteed. Also, this is an expensive exercise that only the relatively affluent companies should consider.

There is yet another temptation which needs to be firmly resisted at the threshold. This is the unhealthy practice of the immediate predecessor CEO moving into a Board position as a Non-Executive Director (NED), and, after the cooling off period, getting re-categorised as an ID. The fact that he/she has actually not left the company, but merely changed roles, should give rise to the question “independent of whom?”. Such persons will be excellent candidates for being appointed on other Boards, and should be persuaded to leave the safe shores that they had occupied for a long time.

Departures, if they are sudden, are disruptive, and damage the credibility of the Board and its processes. We need to look no further than the recent dramatic developments in a Payments Bank which sought the approval of the shareholders for a second term for 2 IDs, while the parent company ensured that the resolutions were defeated.

Where then should NRCs look for suitable candidates to be accessed and assessed? A good starting point would be to list the persons who are known to members of the Board and to senior management. The fact that they are known should not lead to the conclusion that persons from a certain comfort zone alone are being considered. No matter how well the job description is written out, the understanding of company insiders, including, but not limited to, Board members, would be superior. Conflicts of interest, if any, should be addressed upfront, to eliminate, from possible consideration, those that are otherwise well qualified, but suffer from existing or identified potential conflict(s).

With a large number of vacancies certain to arise, there will be intense competition by different companies for the same set of “marquee” Directors. Therefore, companies seeking to get some of them on their Boards should start the exercise now. Leaving it too late could mean that vacancies could be later filled with sub-optimal candidates, whose presence on the Board will have to be endured, and in some cases, suffered, over the next 5 years.

One possible source which has remained untapped so far is the large number of serving senior executives in different companies. There are outstanding persons, who are at one level below the Board, and who, in due course, might expect to move up as Executive Directors (EDs). Some of them would be excellent candidates for Board positions in other companies, where there is no conflict of interest. In addition to giving them practical boardroom experience, which no theoretical course, however well designed, can give them, they will be the persons best equipped to bring into their parent companies, the good practices that they observe in the companies on whose Boards they sit as IDs. Many companies seem reluctant to permit their senior executives to accept Board positions in other companies, the common argument being that they have enough on their plate with their existing assignments. This is a short-sighted approach. Getting executives ready for Board positions is a cause best served by exposing them to other Boards, where learning without executive responsibilities can be facilitated.

“The Great Exodus” is also a good opportunity for some Boards to consider whether there is a case for reduction in size, leading to better Board dynamics. This is especially true in the case of companies which are required to match the large number of EDs and Nominee Directors with an equal number of IDs, and resultantly have unwieldy Boards. The possibility of creating a Supervisory Board, by whatever name called, and moving some of the IDs to that Board or body, should be examined. While it is true that there is no express provision in law contemplating the setting up of Supervisory Boards, it is equally true that there is no express prohibition to set up such supervisory entities.

Yet another opportunity that presents itself should not be overlooked. IDs, who through a robust process of evaluation have been found to not measure up, should be persuaded to leave along with those whose terms have expired, if not earlier.

A recent report of a Parliamentary Committee, which looked into the composition of the Board of Directors of a large public sector undertaking recommended that all the IDs to be appointed should have domain expertise, and a track record in the relevant domain. This, it is submitted with great respect, goes against the grain of how a Board should be constituted. The presumption certainly is that all executive members of the Board are domain experts. If a bunch of NEDs, all of whom are domain experts, are brought into the Board, the expertise of the Board will be unidimensional, and will not serve the interests of the company. The Board being the seat of wisdom, and not of knowledge, which is the preserve of the management, should have diversity of expertise and experience to serve the interests of the stakeholder community. It would be unfortunate if Board conversations degenerate into different experts trying to prove who has more expertise. “More of the same” is an avoidable proposition.

This is also an opportunity to address the vexed question of exclusion from the Board of Lawyers, Chartered Accountants, Management consultants, and other professionals, who either by themselves, or through their firms, have a business relationship with the company. The present stipulation, which seeks to define independence in terms of the earnings from the company being less than a certain percentage of the total earnings by the firm, is a completely unsatisfactory arrangement. Independence cannot be reduced to mathematical calculations, and is essentially a binary proposition. It is not as if a country as large as India, with a large number of professionals, cannot throw up candidates who have no relationship, past or present, and who hopefully will have no relationship in the future, with companies on whose Boards they seek to be Directors.

2024 presents arguably the best opportunity for companies to have Boards that add value, and discharge, to the satisfaction of the entire stakeholder community, the responsibilities of superintendence, direction and control. Whether this is a hope that will translate to expectation will be seen over the next 2 years.

What should the ID of 2024 bring into the boardroom? At a minimum, these would be the attributes of maturity, integrity, inquisitiveness, industriousness, intelligence, domain familiarity (as distinct from domain expertise), decision-making ability, balanced judgement, and a sense of accountability.

When all is said and done, boardrooms must be places where conversations that are robust, stimulating, challenging and productive take place, on a continuing basis. The alternative of peaceful coexistence, which regrettably exists in some boardrooms, is best captured by a limerick that the Moral Rearmament Movement, in the early 1960s, gave to the world –

“Water Buffalo, Water Buffalo,
Eating a soggy banana,
He is not on vacation,
He is serving the nation,
In a non-controversial manner”.

Cut to 2022. Biscuits have replaced bananas. Has much else changed? 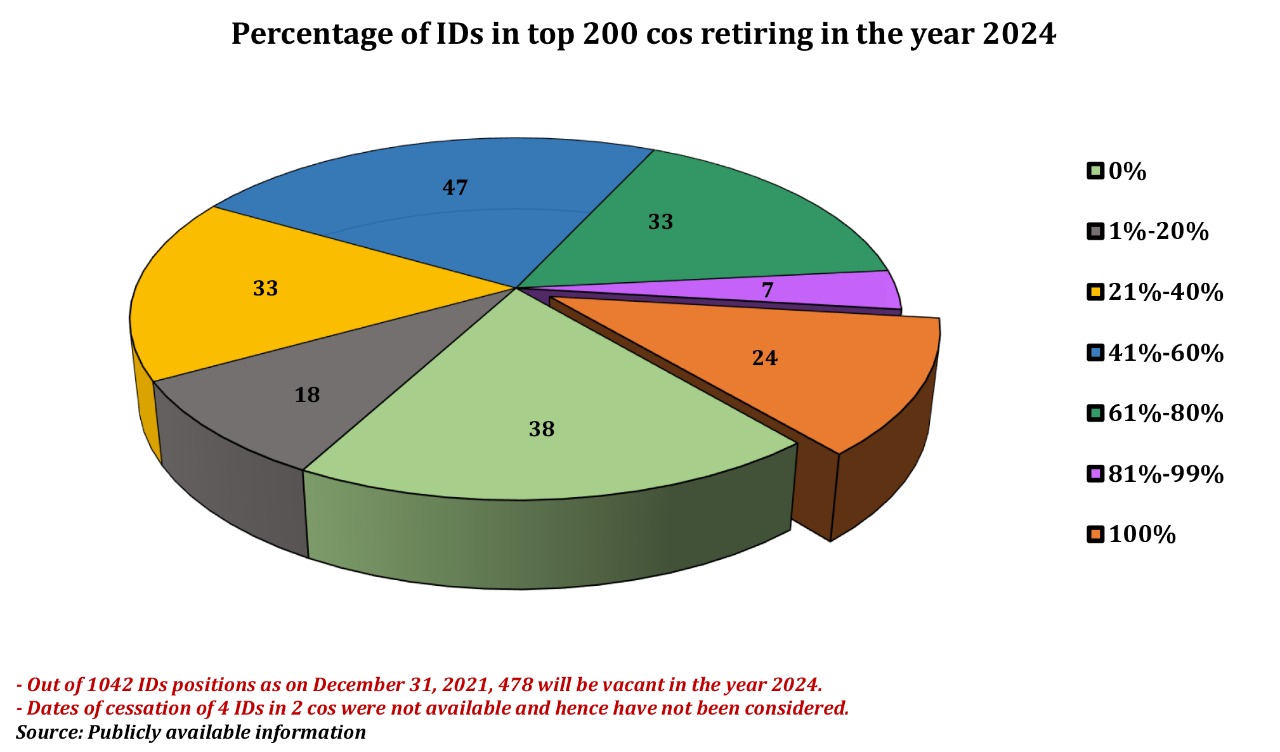