We trust that all of you and your families are staying safe and healthy.
Overcoming odds, without getting deflected from one’s purpose, is the hallmark of a true winner. A non-physical AGM is only one manifestation of the virtual and the virtuous standing up to the problems posed by the pandemic. With the quorum and the forum, the meetings shall go on.

The last wicket has fallen. No one seems to have gone up for a review of the decision within the stipulated time. Resultantly, shareholders who with bated breath, waited for the get-together, also known as the Annual General Meeting (AGM), will have to wait till next year.

Even in the face of the pandemic and the problems it caused, the Ministry of Corporate Affairs (MCA) dug in and held on to the possibility of physical meetings to take stock of the performance of the company by the shareholders. The first retreat was in regard to Board meetings, more of which were permitted to be conducted by video conferencing (VC). The next concession was in regard to Extra-ordinary General Meetings (EGMs), where the possibility of physical meetings with problems caused by the absence of physical distancing, was recognised, and virtual EGMs were permitted. Even at that stage, there was a legitimate expectation that this relaxation would apply equally to AGMs. Recognising that the virus was in no hurry to leave, the MCA finally conceded that AGMs would also be conducted through audio-visual means. The remote possibility that postponement and deferment of last dates would help the system to hold onto its orthodoxy, was finally recognised as futile.

When any major change takes place, it is useful to identify the possible winners and losers, arising out of that change. At a time when humankind is struggling to be positive, it is preferable to first look at the possible winners. Topping the list are company managements. No longer is it necessary to ensure that adequate copies of the annual report are printed and dispatched, only for a few persons to come to the AGM, allege non-receipt of the annual report, and attribute motives to the hapless Company Secretary and her team, while the Registrar and Share Transfer Agent’s representatives sit smugly on the side-lines.

Physical logistics is yet another area where the workload of the management is considerably reduced. There is no pressure any longer, especially in the large metropolises, to fix a date for the meeting depending on the availability of a suitable venue. In this regard, AGMs competed only with marriages, which too were fixed after ascertaining the availability of the venue of the marriage, and hopefully after ascertaining the willingness of the bride and the bridegroom. The equally important requirement of arrangement of bus transport, with adequate storage of drinking water, when meetings are held in remote locations, does not need to be met. Refreshments at the venue also do not require to be catered for. Equally important, in these challenging times, of shareholder adventurism, the deployment of security to ensure that AGMs do not become combat sports, is also not necessary.

The next set of winners are the members of the Board of Directors. Those that consistently chose to give a miss to the AGMs, have no reason for guilt this time, since their presence in the comfort of their homes would translate to attendance, if they choose to participate. During physical meetings, the Directors are seated on the stage, allowing for close shareholder scrutiny of how they conduct themselves on stage, as reflective of their involvement in the proceedings. As every young magistrate is taught at the beginning of her career, it is important to see the demeanour of the witness in the witness box, before arriving at conclusions as to the veracity or otherwise of their statements. The demeanour of Directors will not be in evidence, since they will be protected by the screen behind which they remain for the duration of the virtual meeting. The stipulation that at least 1 Independent Director should attend the meeting amounts to giving a free pass to the rest of the Board. It should be provided (to borrow the language of Schedule IV of the Companies Act, 2013) that every Director should strive to attend the meeting. Chairpersons should be given the authority to distinguish between explanations and excuses when it comes to attending AGMs.

With managements and Directors clearly being beneficiaries of this exercise, there is a corresponding price that shareholders will pay. At one time, it was believed that shareholders came to AGMs to cast their votes on resolutions brought by the company for their approval. With e-voting having been permitted a few years ago, the large majority of votes would already have been exercised before the commencement of the AGM. Hence that element of the requirement of shareholder participation seems less relevant. The annual meeting is also the only opportunity for shareholders to ask the Directors, seated in front of them, tough questions that relate to the superintendence, direction and control of the management. Notwithstanding the reduced seriousness of these meetings, there are a few that turn up with well-thumbed copies of the annual report, with several pages appropriately flagged, and with their questions carefully written down on separate sheets of paper. These are the shareholders whom managements dread, since inconsistencies, inadequate explanations, incorrect numbers and inappropriate conclusions can be questioned, without fear or favour. In meetings by VC, this opportunity will remain at a theoretical level, but the intensity and thrust will be somewhat neutralised by the non-physical nature of the meetings.

Does it then mean that the AGM will also become a calendar item to be put behind in routine fashion, rather than an opportunity to engage with shareholders, respond to their questions and comments, and extract value from their observations? While such a conclusion should not be rushed to, and we must await the outcome of the first set of virtual AGMs, it would be overly optimistic to entertain the hope that these meetings would be as effective as physical meetings.

In informal discussions, the question has sometimes come up as to whether long postponements could not have been given in the expectation that the virus would get bored, and move on elsewhere. This is not even a theoretical possibility since the approval of shareholders for a number of items is necessary for the companies to carry on their business.

If virtual AGMs are clearly sub-optimal, and if they cannot be indefinitely postponed, is there a way to ensure that the shareholders get the opportunity to collectively engage with Boards and managements?

There is no doubt that the MCA and Securities and Exchange Board of India (SEBI) as custodians of the interest of shareholders, especially retail shareholders, will be looking at the possibilities of bringing Boards, managements and shareholders face-to-face on a not too distant date. One possible manner in which this could be attempted would be to immediately issue instructions to all corporates that, assuming an improvement in the health situation of the country, the possibility of a physical meeting with shareholders, on the lines of an AGM, should be considered in the fourth quarter of the current financial year. While annual accounts and resolutions for appointment of Directors and auditors as well as the various annual reports would have been cleared in the virtual AGM, the physical meeting in the fourth quarter of the financial year could look at updated performance reports as well as be an unstructured conversation with shareholders to address issues that might be bothering them. This would lead to the promotion of true stakeholder democracy. Forward looking Boards can resort to this practice without waiting for a directive from MCA or SEBI.

Since there is no guarantee that the optimism expressed in the preceding paragraph will take material shape, it would be necessary to arrange for the Board/ management to respond to as many questions as possible during the virtual meeting. To facilitate this, questions should be obtained in advance from the shareholders, and should be grouped subject-wise. Based on their relative relevance and importance to the large bodies of shareholders, the Chairperson of the meeting could take up the questions sequentially. Yet another alternative would be for SEBI to consider whether shareholders could forward their questions to representative investor bodies, who could then participate in the meeting through special proxies, and could raise the appropriate questions in a representative capacity. One possible way of ensuring that shareholders get to hear the Chairperson/ management is to arrange for live streaming of the proceedings of the AGM, so that shareholders, who are not able to participate in the two-way proceedings (as provided for by the circular of MCA on general meetings), can at least benefit from hearing the responses given to them. The provision for uploading the transcript of the AGM proceedings subsequently, has limited value. The objective is to ensure that every possibility of a constructive conversation should be examined for feasibility and legality.

In a disclosure-based regime, transparency is the lodestar. Communication is the instrumentality of disclosure and transparency. AGMs are exercises in communication. Therefore, if for good reasons a regular AGM cannot take place at the right time, alternatives must be explored. A disconnect, however temporary, between minority shareholders and corporate entities will do considerable damage to a vibrant corporate environment. 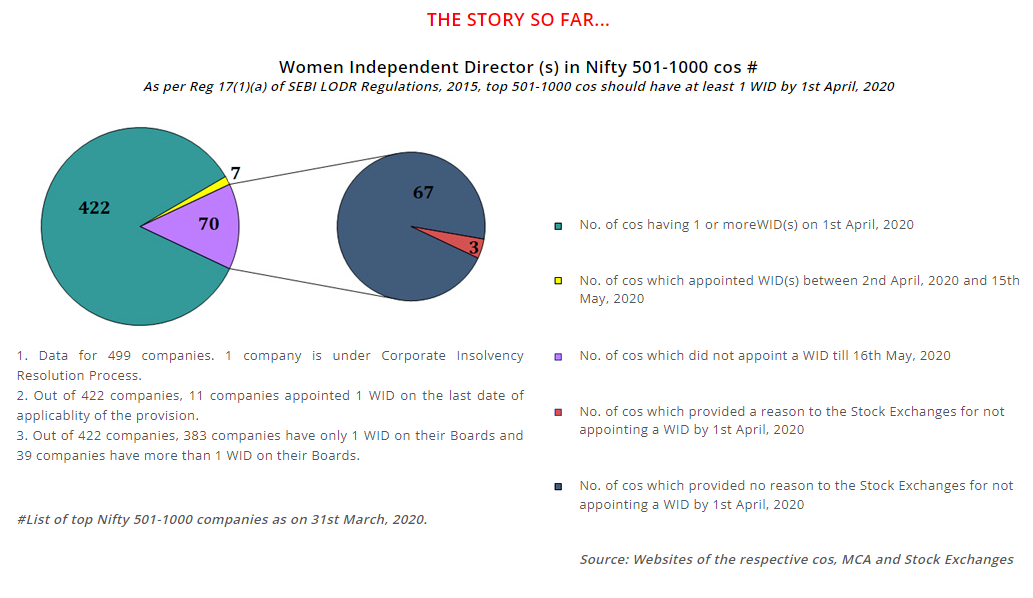 S. Sandilya, Chairman, Eicher Group
“Be Supportive and Not Disruptive” is the mantra at this stage. It is valid for normal days as well but more so under the current circumstances.”

Somasekhar Sundaresan, Independent Legal Counsel and former Partner, JSA
“Para 4 is spot on! Worse, even those not on the board interfere and expect to be kept informed!”

M G Paramewaran (Ambi), Former ED and CEO, FCB Ulka Advertising
“I often wonder which side of the ‘Lakshman Rekha’ I am in, when I send a mail or call an MD of a company where I sit on the board as ID.”

Sushobhan Sarker, Former Director, National Insurance Academy, Pune and Former MD, LIC
“Overwhelming as the crisis has been and as it may further turn out, you have reminded boards not to lose sight of their responsibility to contribute to corporate strategy along with supporting the management in their tactical firefighting.”

Milind Kulkarni, Senior Advisor and Former CFO, Tech Mahindra
“In my opinion the need of the hour is for Boards to guide/embolden management to take a long-term view. ”