THE YEAR THAT NEED NOT HAVE BEEN

Our January newsletters normally take a peek into the past to see whether things could have panned out better. We do so this year too, but with the hope that the next year would be unrecognisably different. 2020 was the year that should not have been. Its utility, if any, is captured in the statement: “Nothing is entirely useless; the worst of them can serve as a horrible example”.

When Steve Jobs, the last of the three, bid goodbye in 2011, a cynic, in a despondent mood, claimed that the world had become a sadder place since there was “no Jobs, no Cash and no Hope”. He might well have been speaking of what a large number of persons experienced in 2020. Mercifully, the doomsday predictions have receded, and optimism, based on signs of visible improvement on the health and economy fronts, seems to be the order of the day. Job losses, diplomatically described as “Home-from-Work” seems to have been overtaken by “Work-from-Home”.

Corporate India seems to have recovered from the body blow administered by Covid-19. Regulatory forbearance, extension of timelines for compliance, dilution of statutory and regulatory expectations, and a more accommodating stance by persons in authority, appear to have energised corporate India to get back to creation of wealth and restoration of jobs and income. RBI’s efforts to enable borrowing entities to get to terms with their finances, was complemented by the judiciary’s gentle push to recognise ground realities and to hold back punitive measures when borrowers were unable to meet their repayment timelines.

The Ministry of Corporate Affairs (MCA) pressed ahead with its efforts at decriminalisation of a plethora of offences which hitherto had companies focussing disproportionately on compliance, as opposed to commerce. In what seemed to be like a new year gift to the community of intending Independent Directors, the list of persons exempted from taking the mandatory examination, was significantly expanded. What was regrettable was that the illogicality of the examination was ignored, and the exemptions tended to reinforce this dubious requirement for Directors to absorb theoretical knowledge, proceeding on the assumption that nothing else was required in the boardroom. The categories exempted merit detailed comment. For the present, suffice it to say that being in the appropriate Ministry or Regulatory organisation, no matter what the level, does not equip persons, however well informed, to add value in boardrooms.

The report of an Internal Working Group, put into public domain by RBI for comments, also led to concern and criticism. Corporate ownership of banks, which was for many decades, believed to lead to the evil of connected lending, was proposed to be resurrected, on the specious plea that the banking industry required more capital, and there was no source, other than the corporates, that could infuse the requisite amounts. Connected lending, which along with behest lending, form the negative twins in the banking sector, was earlier sought to be buried through the nationalisation of the erstwhile private sector banks. While reform is contextual, and can take different shapes depending on the requirements of the day, the fundamental problems associated with corporate ownership of banks cannot be wished away. It is, as of now, only a recommendation, but perhaps one that needs to be buried ten fathoms deep.

In the area of Corporate Governance, there was one major disappointment in the year gone by. It was expected that the question, whether a majority shareholder should have the unfettered right to run the company, in the manner that it deems fit, would be finally determined by the highest Court of the land. As we enter 2021, it is hopefully in the last lap of determination. Much of what will happen in entities where promoters have a majority shareholding or a significant shareholding will be determined by the outcome of this case.

The year gone by also saw a few banks bite the dust. The saga of the Mumbai-based bank, with a larger-than-life promoter, came to a happy ending with the largest bank in the country having moved in to set matters right. However, a multi-state cooperative bank, headquartered in the same city, came to grief with disproportionate exposure to a group with a dubious track record. While some steps have been taken by the Banking Regulator, the depositors seem to be left in limbo.

Elsewhere however, the reaction of the Banking Regulator was swift and effective. In a South-based bank, which saw a boardroom battle leading to the exit of the Chief Executive and several Directors, merger with the Indian subsidiary of a foreign bank, was quickly resorted to. While the interest of depositors will be protected, and the interest of the shareholders will be left to fate, the more important governance issue remains to be resolved. Boardroom battles, leading to a lack of confidence in Directors and management, do not happen overnight. The question must be asked, even if resolution has now been attempted, as to whether there were early warning signs which merited effective intervention long before the blowout happened.

In yet another South-based bank, the shareholders, by a large majority, decided to prematurely terminate the stay of a Chief Executive. Interestingly, that Chief Executive had been appointed at the Regulator’s behest to fix matters in a bank, where things were clearly going wrong. An ex post facto analysis of alleged regulatory inaction will not be out of place, if only to restore confidence in the banking system.

The Mutual Fund (MF) industry was not without its share of excitement. While television ads continued to ram home the message “mutual fund sahi hai”, a large MF suddenly shut down some of its schemes without seeking the approval of the investors. While Courts have looked into the matter, and passed orders, it is now left to see how investors vote on the resolution to close the funds. Hopefully, more clarity will emerge on how investors, who had been lulled into complacency, by higher than benchmark returns, premised on risky investment management styles, will respond to the sudden shock of termination of schemes. Will the risk-reward trade off register better in the minds of investors?

In a year in which gender diversity is not merely spoken of, but in fact celebrated, a discordant note was struck by a group which denied a Board seat in the holding company to a highly qualified woman family member of one of the promoter families. When last heard, faced with a legal challenge, the men in-charge had opted for a major restructuring of the company. Hell hath no fury like a woman scorned?

One large group, involved in mining, seemed to turn a blind eye to the provisions of its Dividend Distribution Policy (DDP), and to retain with it, the dividend paid by a group company, without passing on the dividend, as in the previous years, to minority shareholders. What purpose does a Policy serve if it is given a go-by with extraneous explanations trotted out? Are we likely to see the proposition of enforceability of the Policy being tested in Courts of law, with shareholders likely to claim that they stayed invested in the expectation of receiving dividends as they had done in the past?

2020 also saw the auditing community being pushed on the back foot. While auditor resignations, with or without valid reasons, continued as before, they were 3 high profile cases of auditors from one of the big 4 entities being pulled up by the NFRA for absence of professionalism and independence. The matter awaits final determination by the Courts. Meanwhile, these orders serve as a wakeup call to auditors on the pitfalls that lie ahead if they do not act objectively or are seen as not acting objectively. Interestingly, at the same time, the Public Company Accounting Oversight Board (PCAOB) in the USA is diluting the requirements that it has from the auditing profession.

A leading private sector bank realised that when misfortune comes, it does not come alone. At first it had to contend with the indefensible act of billing those who had availed of car loans for an item, the cost of which was added to the dues payable by them, without keeping them in the loop. This led to departures of a few key executives. Within a few months, the RBI, taking note of the frequent breakdown in their online services, directed that the bank should not add any more credit card customers to its fold, without ensuring that the systems do not give way, as they did in the recent past.

Even as this newsletter was finalised, came the news of Tatas, Trusts, Taxes and a Tribunal. A T-party of sorts to end the year?

Wishing you a new year that keeps you happy and healthy, and brimming with excitement, enthusiasm and energy.

Excellence Enablers recently co-hosted a webinar with NSE, on CONFLICT OF INTEREST. This was the fourth dialogue in CONVERSATIONS ON CORPORATE GOVERNANCE. For the report, click here 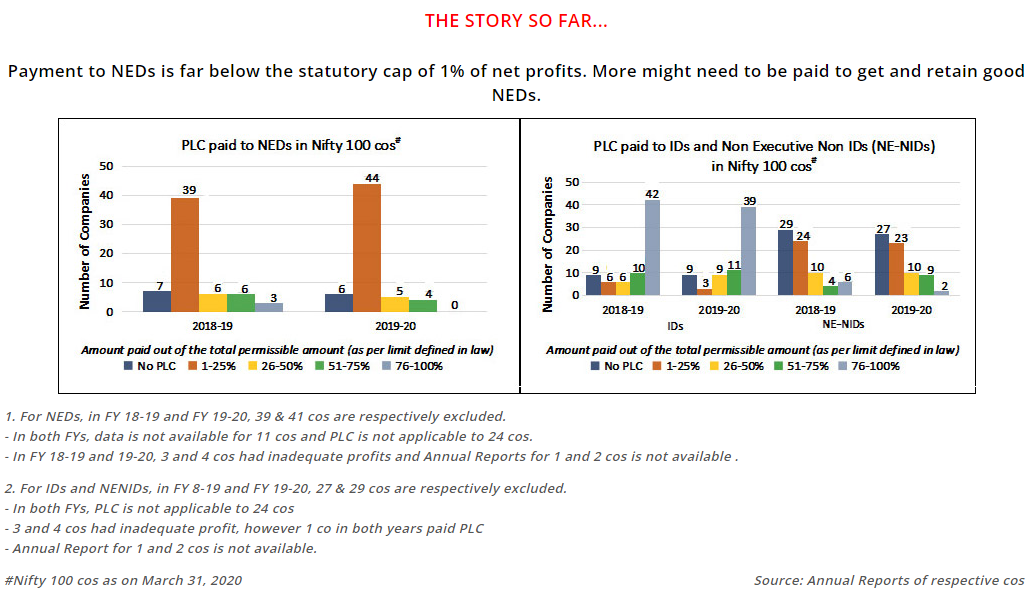