The recent past has witnessed a flurry of activity in regard to the making of rules and the writing of regulations. Not enough thought seems to have been given to either the need for new regulations or the way in which these regulations are likely to impact the smooth conduct of business. The question whether “one size fits all” in the area of regulation is worth pondering over.

One of the eternal problems, that humankind has been contending with, is the continuing confusion between means and ends. If this issue is not frontally addressed, whenever it arises, we could come up with solutions that are much worse than the problems we seek to solve.

Regulation is a case in point. Many regulations have been written without adequate clarity on what is sought to be achieved, and resultantly the disproportionate price that regulated entities must pay on account of new regulations. Regulatory Impact Assessment (RIA) is spoken of often enough, but no concrete steps have been taken to give effect to this constructive concept.

The objective of any regulation ought to be the ensuring of a level playing field for all participants, who have been apprised of the rules of the game, before such rules are given effect to. This prompts two questions. Firstly, should regulations be enforced equally, without exemption or extension, for all entities irrespective of the ownership pattern? Secondly, should regulations be the same for all regulated entities, irrespective of their size?

The first question assumes urgency in the context of RBI’s recent Discussion Paper on Governance in Commercial Banks. It provides, inter alia, that directions issued by the Government in respect of entities either wholly owned or majority owned by the Government, will, in the event of inconsistency, override the regulatory requirements as set out in the Corporate Governance framework. Simply put, it would amount to exempting public sector banks from some, if not all, of the proposed regulations.

The situation contemplated in the preceding paragraph strikes at the root of the requirement of a level playing field on which all participants can compete equally, without any undue advantage being conferred on one set of participants, on account of their ownership pattern. Two examples will illustrate this point. When the requirement of a certain percentage of Independent Directors (IDs) was prescribed in the erstwhile Clause 49 of the Listing Agreement, for all listed entities, many Government owned entities initially sought exemption from complying with the requirement. When that request was turned down, extension of time was sought. The argument seemed to be that since the entities were Government owned, and subject to the oversight of institutions such as the CAG and the CVC, it was unnecessary to prescribe a minimum number of IDs as an instrument to prevent the possible excesses of management. This argument, which was fortunately not accepted, was premised on the assumption that the Government as the owner of these entities, can do no wrong in regard to Corporate Governance. The fact that this requirement was prescribed by a regulatory body, set up by statute, was conveniently lost sight of.

Yet another instance was the callous response to the stipulation that each corporate Board should have at least one woman Director. Having prescribed this requirement, the Government did not think it urgent or important enough to ensure compliance by its own entities, before looking in the direction of private sector entities. As things turned out, most, if not all, private sector entities complied with the requirement, whereas Government entities brought up the rear in the matter of compliance.

If regulation is a means to an end, it is necessary that it is equally applicable and equally enforced in respect of all entities, regardless of the ownership structure.

A second question which arises is whether the same set of regulations should be applicable to all entities, regardless of size. This is a matter in respect of which the jury is still out. There is a view that no matter what the size of the organisation is, the set of rules and regulations which apply should be the same. This approach might not have contemplated a few problems. Firstly, compliance comes with a cost. Often, at the initial stages of its existence, a company is hard put to invest enough in terms of management bandwidth or resources, to ensure total compliance. This fact has been recognised by securities market regulators in several jurisdictions, by way of providing for separate exchanges, with lower initial compliance standards, for the relatively smaller entities. However, the view that smaller entities should have lower compliance standards is also not without its drawbacks. If such a stipulation is given effect to in perpetuity, there would be a tendency on the part of some entities to either remain small or to carve out separate smaller entities with lower compliance standards, so that regulatory oversight is not sufficiently deep. It is well known that many frauds take place in the smaller subsidiaries, some of which might have been set up to facilitate fraudulent activities. Therefore, it would be desirable to prescribe a timeline of a few years by which the smaller entities would graduate to higher levels of compliance. Such a move could be appropriately incentivised so that no entity persuades itself to remain at a low level of compliance.

As regulation evolves, it is necessary to address the relevance of both ownership and size to the level of regulation. There is universal recognition that regulation is an instrument to aid orderly growth of entities as well as markets. It follows that the phasing-in of regulations should assume paramount importance.

Does the answer lie in having one set of regulations that are common to all entities, irrespective of size, and to simultaneously providing additional regulations that set higher benchmarks for bigger entities? As for ownership, let us remember that exemptions, and extensions of time, based thereon, will be the final nails in the coffin of Corporate Governance. 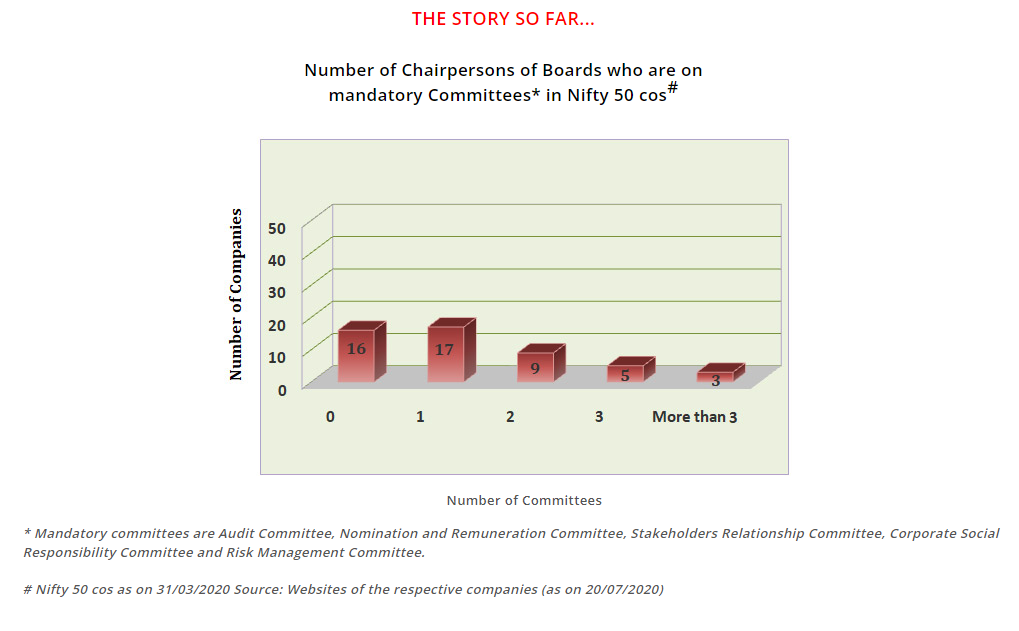 READERSPEAK – BOARDS AND THEIR BURDEN

R Shankar Raman, Whole-time Director and CFO, Larsen and Toubro
“As usual, your candour makes it a compelling read.”

Sanjiv Malhotra, Former Director, Central Board of SBI
“Thanks for sharing this very insightful note! In line with your views- Key requirement for effective Bank Boards, particularly the larger banks in India, is to have at least 2-3 NEDs, who are experienced Banking, Financial and Technology Domain specialists, particularly in the Risk/ Audit and Technology Committees.”

Jitender Balakrishnan, Former Deputy MD, IDBI
“Poor performance of Banks and rising NPAs has really less to do with governance at Board level than various other factors. Boards in Banks are as good or as bad as in any Corporate in India.”