Finding the right leader, even in “normal” circumstances, is a formidable challenge. The chosen individual will have to get everyone in the organisation to perform to potential, while respecting laws and regulations, and in the process unleash the latent energy in the organisation. Easier said than done.

The intentions cannot be questioned. It is the outcome that raises uncomfortable questions.

It would be useful to capture the context in brief, before the issues are addressed. The present tenure of Mr Vikram Limaye as the Managing Director (MD) and Chief Executive Officer (CEO) of the National Stock Exchange (NSE) comes to an end on July 16, 2022. He is eligible for another term. However, to be given another term of office, he would be required to compete in a selection process, with candidates who could be insiders or outsiders.

Newspaper reports have it that Mr Limaye is not inclined to serve for another term. This would mean that a new CEO would have to be selected, and positioned, before July 16, 2022, on which date Mr Limaye’s term expires.

In the normal course, such a move should not have raised eyebrows. The requirement for the incumbent MD and CEO to go through a selection process is the result of a rule put in place by SEBI, consequent on some of the interminably long tenures having caused serious issues in the organisation. In theory, SEBI’s move is laudable. What needs to be examined is how appropriate this would be in the present context.

In a relatively recent order, SEBI has taken punitive action against the former MD and CEO of NSE, leading to her exiting the position and the organisation in December, 2016. The present incumbent, Mr Limaye, assumed office in July, 2017, after interim arrangements had been put in place for the period prior to his assumption of office. It Finding the right leader, even in “normal” circumstances, is a formidable challenge. The chosen individual will have to get everyone in the organisation to perform to potential, while respecting laws and regulations, and in the process unleash the latent energy in the organisation. Easier said than done. does not appear to be anyone’s case that Mr Limaye is a part of this problem that has caused considerable embarrassment to the NSE. As against this, those that have observed the organisation fairly closely, have pointed to some initiatives and good moves that he has made in regard to addressing process issues, as well as reputational issues. It is possible, and even likely, that some of the measures taken have neither been adequate nor fast enough.The moot point is that some action has been taken, and it seems to have been in the right direction.

This is not a piece to plug Mr Limaye’s candidature for another term. What is important is the issue involved, and not the persons. The present case is only a peg on which to hang the general argument.

No one in his senses can quarrel with Mr Limaye’s decision not to be a part of a selection process, before being considered for another term. He would have served in the post of MD and CEO for 5 years, and it would be far more logical to appraise his performance during that period, than to have him respond to questions in a brief interview, conducted by persons, someof whom, might not have a nodding familiarity with the way Exchanges ought to be run.

Regrettably this is not the first case of its kind, nor is it likely to be the last, unless pragmatism informs the process of regulation-making, and takes into account contextual realities. Many moons ago, the then Chairman of SEBI, who was about to complete a 3 year term, was asked to take part in a selection process, along with several other persons. He was eligible for another term, but eligibility admittedly does not translate to entitlement. The first question, which the decision-makers ought to have asked in such cases,was whether the individual had done well enough to merit another term. If the answer was in the negative, no purpose would have been served by including him among those being considered for appointment. His response that he was not “an applicant, a supplicant, a candidate or a job-seeker” must have eliminated even the theoretical possibility, however remote, that he could be considered for another term.

Mr Limaye is in a similar situation. His appearing for a selection process, when his record is there for all to see and judge him on,positively or negatively, could impact the organisation and the individual adversely.

Similar situations warrant a two-stage process of decision-making. The first, as already pointed out, is to determine whether the incumbent is good enough for another term. It is only after this stage is crossed,and the conclusion is negative, that there must be a selection process involving other candidates.

There have been quite a few instances in the public sector, including in the public sector banks, where an incumbent, on completing his/her initial term, and having a reasonably long period of time before attaining the age of superannuation, is given an extended term, without a selection process. At the same time, there have been cases of persons who on completion of their initial term, had a residual period before attaining the age of superannuation, but were peremptorily sent packing. It begs the question whether such candidates, who were found to begood enough to serve till the last date of their initial tenure, suddenly became so unfit as to not be considered for a subsequent term based on residual service. In the case of the NSE, the situation is even more complex. There are Board members who are relatively new on the job. It is likely that the ongoing investigation could lead to the exit of some persons in senior management. Is this the right time to contemplate a change in the incumbency of the senior most management position, when the ongoing process of making improvements, and addressing issues of credibility and reputation ought to be at the top of the agenda? SEBI’s regulation will clearly get in the way of an extended term without a selection process. This would help to illustrate why some pragmatism, leading to flexibility in special cases, should be built into regulation-making. Ideally, the present incumbent should have been given, if not a full term, at least a year or two, during which a credible and competent successor could have been identified, and brought into the organisation, with an overlap period. Continuity, with change, ought to be the guiding philosophy in such situations.

It has been the considered view of this writer that no one should serve for very long in any executive position. That should not however mean that change of a possibly disruptive nature should take place, in order to worship at the altar of rigidity.

Identifying, selecting, and appointing a suitable individual to head an organisation, is, without argument, the most important decision in an organisational context. The process should be initiated several months before the incumbent’s term comes to an end. Ideally, a search cum selection committee, with members who have domain knowledge and credibility, should be tasked with the responsibility of identifying a few suitable persons. Following in-depth conversations with the shortlisted candidates, to assess domain knowledge, leadership attributes, vision, and the ability to commit quality time, the candidates should be ranked in order of merit. If an appointing authority is to depart from the order in the merit list, reasons should be recorded in writing.

As we sign off, there is an advertisement for the post of MD and CEO of Bombay Stock Exchange (BSE). While battling for market share, will the 2 major Exchanges now battle for the best candidate? 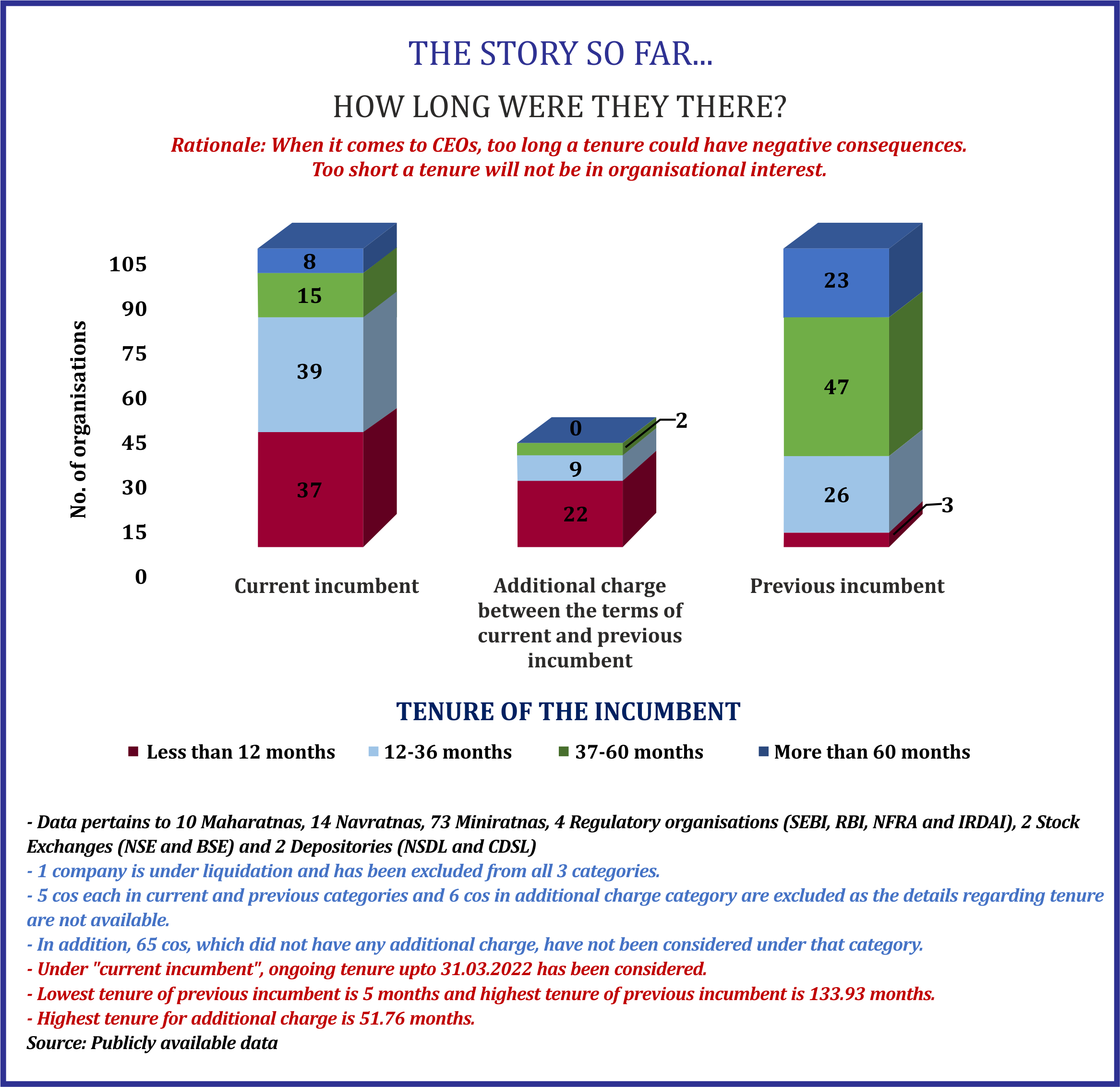