The comments on the Kotak Committee report on Corporate Governance are expected to reach SEBI by 4th November, 2017. In this, our twentieth issue, we present our take on some of the key recommendations.

“Give me a problem and I will give you a Committee” has been a time-honoured, though not successfully time-tested, response. With seemingly unprecedented Corporate Governance issues surfacing in the least expected places, and with boardroom battles being fought in the relentless glare of a salivating media, the appointment, by SEBI, of a high powered Committee on Corporate Governance, was par for the course. The results of the Committee’s labours are now in the public domain. How will this impact the Corporate Governance landscape?

But, first things first. A large unwieldy Committee, ostensibly to represent all sets of stakeholders, is never a great idea. Having no more than a dozen members, with the rest being invited to meet the Committee and share their views, was much the better option. Secondly, and equally importantly, the terms of reference of the Committee could have been thought through and expressed better. Expecting a Committee to find ways to improve the spirit of independence of Independent Directors (IDs) was a huge ask. As Alan Greenspan famously observed (when he was not reducing interest rates by 25 bps), you cannot legislate for honesty. Independence of mind, like honesty, is beyond the pale of legislation or regulation.

The other limitation was that the Committee, consistent with the remit of its creator, understandably focused on the SEBI LODR Regulations and did not opine on changes to the provisions of the Companies Act, 2013. Even then, two Ministries of the Union Government have questioned the legitimacy of some of the recommendations on the ground that they allegedly run counter to the provisions of the Act.

Now to some specific recommendations of the Kotak Committee. By far the most significant is the one that the positions of Chairperson and of Managing Director (MD)/ Chief Executive Officer (CEO) should be held by different persons. Combining the two roles in one person, negates the basic principle of Corporate Governance that an MD/ CEO led management should be accountable to a Chairperson led Board. Those who see this recommendation as creating two power centres in the boardroom forget that the MD/ CEO is the MD/ CEO of the company and the Chairperson is the Chairperson of the Board. Promoters fearful of losing control in the boardroom, can take a leaf from the book of the Government of India which needs only one omnipotent, though occasionally present, Joint Secretary to flex its majority stake muscle. This is, however, not the best advertisement for Corporate Governance.

More Board and Committee meetings are welcome, though the move from 4 to 5 meetings is inexplicable incrementalism. As for the 5th meeting being required to address non-accounts matters, it is useful to note that risk and succession planning will not wait till that special non-accounts meeting.

Qualifications of IDs being disclosed annually is yet another curious recommendation. With shareholders taking note of the qualifications of Directors at the time of their appointment, the annual disclosure thereof does not add value, unless they have been getting additional qualifications while missing Board and Committee meetings. It is useful to remember that the Board is the seat of wisdom, which is a by-product of experience, and does not derive from academic qualifications. An effective evaluation exercise (as distinct from present-day popularity polls in boardrooms) with the process being disclosed, is a welcome first step.

Bringing auditors within SEBI’s jurisdiction is a positive move. The track-record of membership based bodies of professionals in ensuring accountability leaves a lot to be desired, with self regulation in the commercial sector being more of a hope than an expectation.

The report is like the curate’s egg, good in parts and bad in parts. Its authors attribute its relative conservatism to regulation being evolutionary, and not revolutionary. It is tempting to observe that while revolutions can impact the form and structure of governance, evolution is commonplace when it comes to the content of regulation.

A road partly travelled? Perhaps. A lost opportunity? Most likely. For Uday, the consummate artist painting on the corporate canvas, this was the Kotak moment that might have been. 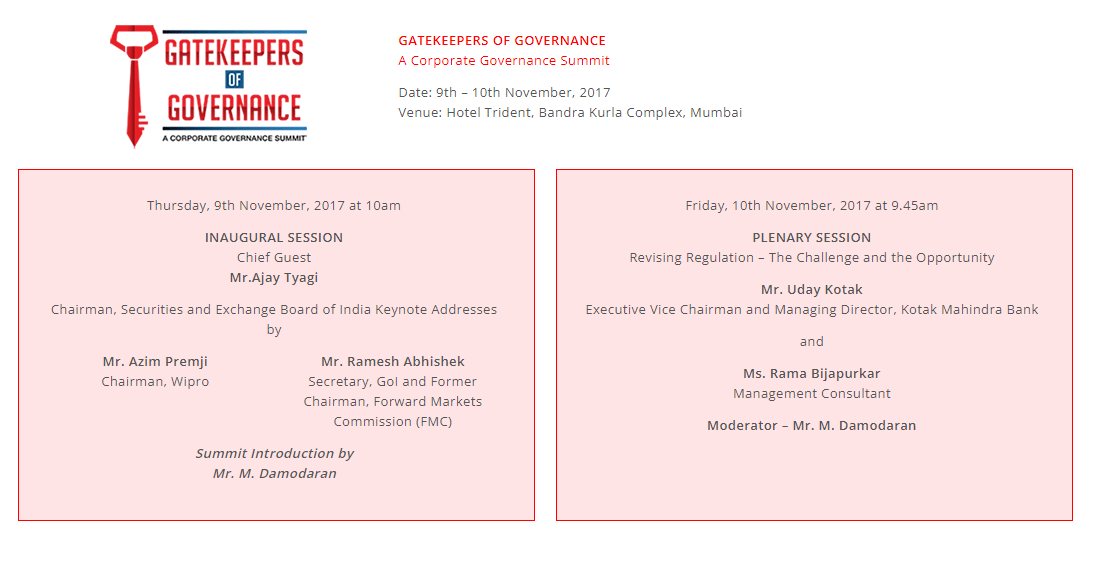