To many persons, Corporate Governance is no more than tick box compliance. The value it delivers to stakeholders is often lost sight of. In this our eighth issue, we bring you the highlights of a conversation between Mr. Yezdi Malegam and Mr. M. Damodaran on the subject “Why Governance?”.

Needless to add, we welcome your feedback.

Initiating the conversation, Mr. Damodaran asked whether it was necessary to regulate Corporate Governance, when many promoters and companies had, even earlier, delivered value to stakeholders without the intervention of Regulators and in the absence of over-prescriptive regulations.

Responding thereto, Mr. Malegam placed the matter in historical context. He referred to the Cadbury Committee which was set up in UK with the primary objectives of preventing loss of credibility of accountancy bodies and to help London retain its position as a preeminent financial centre. Around the same time, in USA, Mr. Arthur Levitt, then Chairman of Securities and Exchange Commission (SEC), questioned the credibility of financial information put out by companies as also the seemingly unjustified increase in managerial remuneration. The Blue Ribbon Committee was set up to address these concerns. Corporate Governance has evolved because of a change in the profile of shareholders from retail to institutional, professional middle class persons seeking company related information in the context of their investments, the accountability of professional management to owners/promoters and an increase in competition among emerging markets for access to international funds.

Corporates have responded to over-prescriptive regulations by box-ticking exercises which are facilitated by a rules-based regime. A principles-based regime, which is often preferred by Boards and heads of organisations, enables a value –based approach to Corporate Governance whereas a rules-based regime, often preferred by compliance officers, leads to box-ticking exercises. He referred to a survey in UK involving 2000 companies and 500 professionals which identified the characteristics of winning Boards and losing Boards.

Mr. Malegam referred to the Combined Code of UK which laid down the objective of Corporate Governance, focusing on the Board’s oversight role and helping the Board to provide entrepreneurial leadership to the management, setting strategic aims and ensuring that resources, both financial and human, are in place. He stressed the need to factor in the country-specific context, principally deriving from culture.

Responding to a question from Mr. Damodaran regarding the impact of compensation on the independence of a Director, Mr. Malegam mentioned that benchmarking by independent agencies can help in determining fair remuneration. While a good Independent Director (ID) should be compensated for her time and expertise, compensation should not be so excessive as to lead to a conflict of interest. Ultimately, it is for each Director to decide how much is too much.

Intervening in the discussions, Mr. Deepak Parekh, Chairman, HDFC, referred to 4 distinct types of companies in India in the context of their governance. He likened family owned promoter companies to a lion, PSUs to an elephant, MNCs to a horse and private companies to a tiger. Elaborating on this, he mentioned that the lions behave like kings of the jungle and set their own standards which might be low. PSUs, like elephants obey the masters, and IDs have little value, especially since the fear of subsequent questioning leads to a passive role. MNCs like horses follow the directions of the parent company and the standards of governance by and large are good. Private companies, with no dominant shareholder, are like endangered tigers. There is not much of dissent or disagreement because of the old boy’s club.

Responding to a question from Mr. O. P. Bhatt, Former Chairman, SBI, Mr. Malegam mentioned that the recent splitting of the post of CMD in public sector banks should work well if, properly selected Chairpersons can tone down the disproportionate power enjoyed by the Government Nominee Directors. Strengthening the process of appointment and enhancing both autonomy and accountability are important. 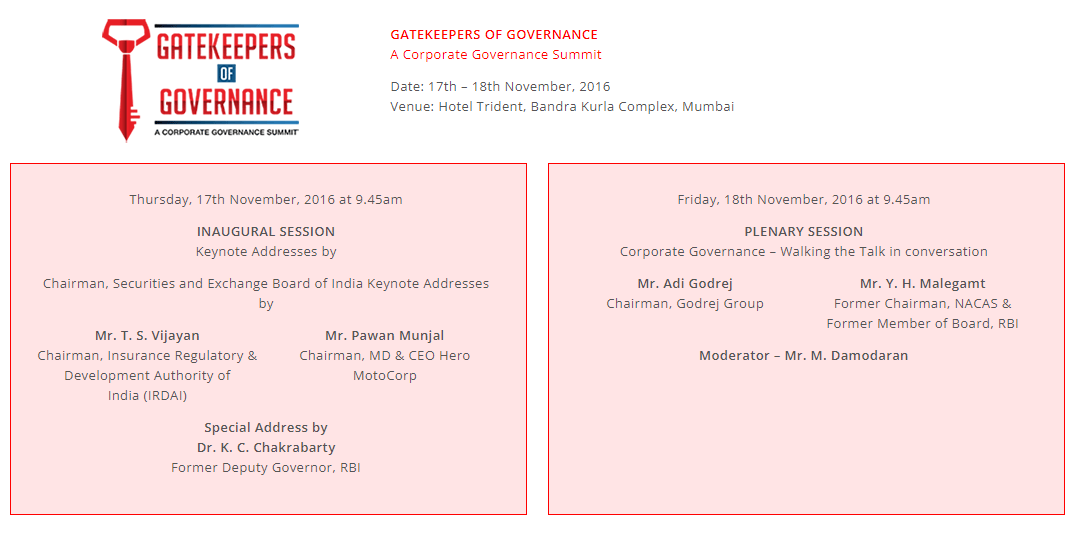